Posted on March 26, 2011 by Nowfeedme| Comments Off on Goulash 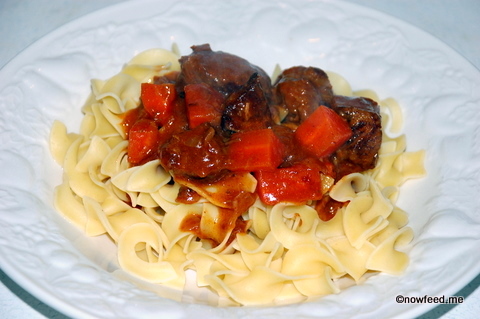 Well the snow kept on coming through the weekend so my thoughts hovered towards warm weather food, stews in particular.  A couple of suggestions were made and I settled on making a goulash.  It’s easy, I had plenty of time, I had stew meat, and I had onions.  I don’t know whether the version I make is authentic but this is the one used in my family.

I started out sautéing 3 onions with a little oil on low heat in a cast iron dutch oven, added a couple of smashed garlic cloves, a little salt, and let the onions soften until translucent, about 10 minutes or so. In the meantime I browned a pound of stew meat in a separate cast iron pan and added the meat to the onions as the pieces were browned.  When done I added a little water to the pan, scraped the good stuff on the bottom and added the mixture to the dutch oven.  I then added a heaping tablespoon of flour and stirred to coat, shook in about 2-3 tablespoons of paprika, stirred some more, then added two cups of water and a beef bouillon cube.

I then let it simmer on low (1.5-2, mostly covered stirring occasionally), for the entire afternoon – although 2 hours is usually enough. About 40 minutes before dinner time I added a large carrot, diced.  Finally I boiled a pot of water and dropped in some egg noodles and cooked according to the package directions.  I spooned the goulash over the noodles in a bowl and voilà!  A sprinkle of parmesan at the table and we had a hearty dinner perfect for a cold snowy evening.

This entry was posted in Food and tagged beef, pasta, stew. Bookmark the permalink.