Posted on March 24, 2011 by Nowfeedme| Comments Off on Pork Roast 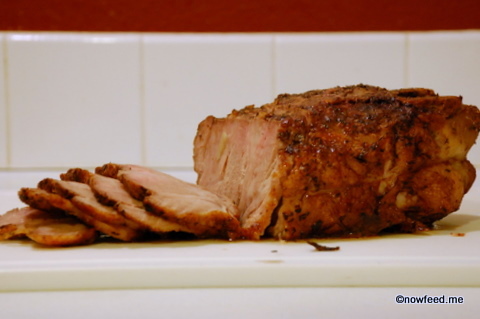 We took out a pork roast from the freezer a couple of days ago and had it defrosting in the refrigerator, so it was time to use it.  Being Sunday I figured I’d roast it as I had the time.  I didn’t follow any particular recipe,  I simply removed the roast from the fridge for about 15-20 minutes to bring it up to room temperature and after a quick pass through the fridge and cabinet I settled on salt, pepper, thyme, fresh garlic, and some Dijon mustard.  The mustard was a little unusual for me but it felt right.  Not being one to care much for sweet cooked food I passed on sugar, honey, jam or soda that I read many people like with pork.  It just isn’t my thing. 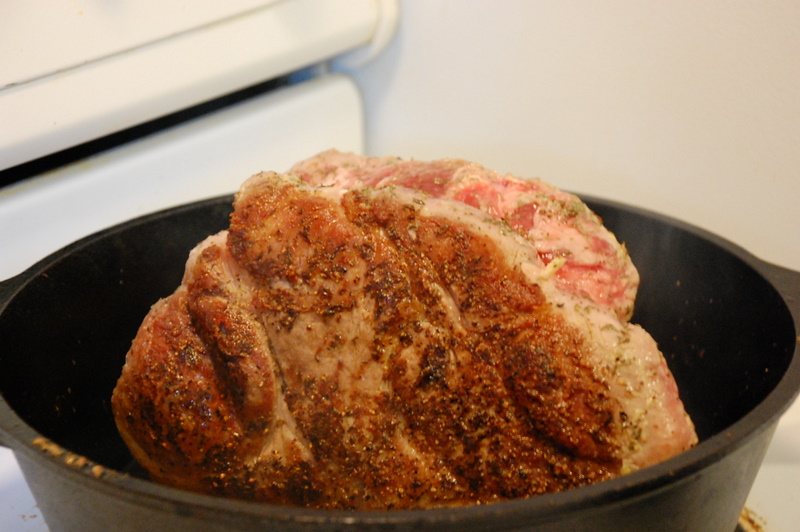 To prepare I preheated the oven to 350 degrees and turned on the stove to just over medium (6) and picked a deep cast iron pan I could transfer from the stove to the oven and placed it on the burner.  Putting the roast on the cutting board I used a paring knife to make deep slits into every side, and stuffed a slice of garlic into each slit so they sank in all the way (if you don’t they burn when you brown the roast).   I then sprinkled and patted down every side with the salt, pepper, thyme, and mustard.  The mustard went on last because I wanted the spices to be in direct contact with the meat. After adding a couple of tablespoons of vegetable oil to the pan I gently put the roast in – to prevent splashing – and browned it for about a minute on each side, and then transferred the pan to the oven for a little over an hour.

At an hour I checked the temperature looking for an internal temperature of around 155 degrees (my thermometer is not very good so I look for 5-10 degrees below what it should actually say) and it still read 140 so I checked again about 20 minutes later.  When done I removed the pan from the oven and placed the roast on a clean cutting board – loosely tented under foil – to rest for 10-15 minutes.  When I thought I wouldn’t send juices all over the counter top I sliced the meat into thin slices.  Some sauteed vegetables and we had a meal.

The great thing about this dish was that although cooking time was somewhere around an hour and a half for just over 3 pounds, prep time was literally about 5 minutes.   The pan drippings can be used as an “au jus” sauce, or you can use it as a base to make a gravy.  A side of creamy mashed potatoes would have gone nicely as well.

This entry was posted in Food, Recipes and tagged pork, roast. Bookmark the permalink.